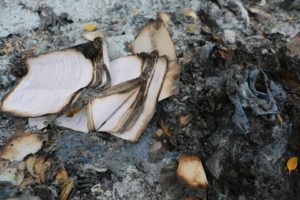 This is my first ever blog post, and as it is my first I
decided to talk about a most recent event to
happen in my artistic carrier.Page damage…
To be honest it was; at some stage at least bound
to happen, I work analogue right up until release
and this month I seemed to be right up against
time; due to no one’s fault that just the way life is
at times. To get to the point I come home from work to find
the horror show that was my current page with
various levels of damage. Water damage, tares
and what seemed to be the page having been
thrown around the room.

To refer to the title of this piece the only feeling I
had was “MISERY” (great story & movie if you
have not experienced either) I was devastated. All
the work that goes into a page, destroyed. So, for
a few days I was unable to work to recoup; in my
time of mourning for my work I had to make the
announcement.

There will not be the usual release. Naturally fear hit me; I’ve let me
audience down, I’ll lose readers & so on.
But a few days after the announcement I realized
something…. its ok. I didn’t loose readers. I didn’t
loose subs, if anything I was even more supported
then I have been to date. How? Why? I wondered
and again I came to a realization.
Luckily, I have had very few set backs when it
comes to my comics work, I’m slow I will admit to
that but overall the train has kept rolling. With
this new-found self-awareness I began anew and
to be frank as I put pencil to paper and pen to
pencil I felt invigorated. So, what’s the point of this
ramble; to be honest its just to let people know
that things happen, and for the most part they
can feel like the end of the world but eventually
something will spark in you and you will come
back even stronger.
To cut a long story short don’t sweat it, be honest,
work hard and even when the (insert expletive)
hits the fan; know that you will come out the
other side better than before.

I am Dylan Lennon. Creator of the horror bending comics known as Lady of the river, Within the woods, and Nightlands.