An Idea Morphed into a Creation

Illustrated, Inked & Colored by Isaiah Schrieber. Written & Created by Troy Amato & Greg Moquin.
A dark and egoistic field agent for the fictional PsyCorp, Zi Grek—Shadow and his aspiring, exuberant younger brother, Nate Grek-Gizmo. Handle the companies’ sins as it invades a poor Egyptian city for its ore and gold. They then leave the city ravaged and resource-less in their wake. While Shadow and Gizmo face an ancient curse, Chinese mobsters, and a slew of meta-humans.
Well there you go! My corny, one paragraphed summary of Shadow & Gizmo—my first solo series. I look forward to writing a multitude of those in the coming months as we begin to roll out SeerNova Comics’ new content and production and promotion begins on Gizmo & Shadow.
Gizmo & Shadow came about from the notes of my ex-friend (unnamed) who wrote these sporadic words in her journal, “The Saint” “The Janitor” and “Agent Apple”. Puzzled for months by these words I was one-night messaging Greg about our upcoming production line for SeerNova Comics when an idea hit me—why not turn those words into a connected story.

Origins of Shadow and Gizmo

I began as fleshing it out as one huge story, of a Saint, a janitor, and a secret agent. After talking with Greg, creating names, and sorting out ideas we came up with the ideas to give Greg’s characters Shadow and Gizmo a whole new backstory. After several days of discussion, we narrowed those words down to one issue (Issue #11) ‘A Saint, A Shadow, and a Janitor, as a phrase that a Psytech employee says about who runs past him in a company invasion- “It was a Saint, a Shadow, and a Janitor!”
Not but a week later I began looking for an artist and started writing the first issue of Gizmo & Shadow, with plans for a full 12-issue, and origins for almost all the story’s characters.

Playing into the history of Psytech—the villainous and mysterious company from our flagship title The Seer Chronicles—Gizmo & Shadow are in the fictional town of Br’le Bl’ra (created from the abstraction of the world brilliant in Esperanto), mining for a mysterious gold ore with sought after powers when things heat up. The older brother, Zi Grek is cursed by the village chief. He then possesses the power to control and communicate with shadows. His younger brother—Gizmo uses his genius intellect and knowledge of technology to create exclusive “ShadowTech” gear.
Soon the brothers are tied up in a harrowing story that involved the Chinese opium drug trade (With an immortal warlord leader known as The Farmer). It connects with a whole slew of meta-human villains. A few of these are a Diamond Skin Russian mobster, Alumas, a family created from noxious chemicals named Cough and Cry, and Trickle—an elemental product of the Egyptian village’s fears and religious beliefs.
The mysterious ore O’ra that the Bl’ra B’ra village holds has the power to create meta humans. This strange power is sought after from people all over the world—good and evil and is what first draws Psytech to send Shadow and Gizmo overseas. The O’ra Mines are protected by the guardian of Bl’ra B’ra, “The Golden Fog”—said to be the first main to gain the O’ras powers—and his family.

I first sent Isaiah the notes for Gizmo and Shadow after requesting for work on Snapchat. Isaiah hit me up and the chemistry was almost instant. Within a day he sent me his first concepts of Gizmo and they came out like this. 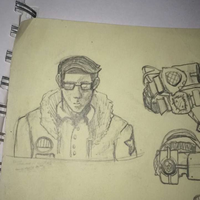 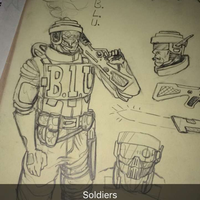 After reviewing more notes and heading back to the drawing board (Literally!). Isaiah sent me these and I was instantly in love. 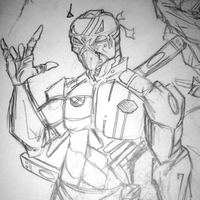 Here’s the finished copy with full color and lettering: 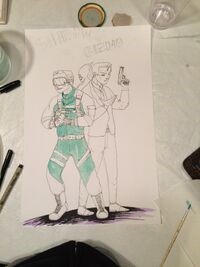