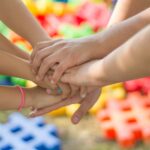 The indie community thrives off of support from their peers however there are a ton of people that are either too lazy to support their fellow creator friend or they just don’t want to. I know what you are thinking, “Oh is this going to be an article about you complaining that you aren’t getting support from all of your peers?” No. I am shedding a light on the fact that said support system exists and more people I believe are just questioning others intentions about this. Confused?! Alright, let me explain.

So, there are people in the indie community that are HUGE supporters of one another. Whether that is they back every crowdfunding campaign they can, they listen to every podcast from creators within the community (there are a ton), shares everybody’s creations all over, or all the above. That is awesome of those people and that is this support system I am talking about. See we grow together yet it seems a ton of people are hesitant to share a peer’s piece of art, comic page or whatever. Now if said creator doesn’t want their work shared all over I get that, but from a marketing perspective, why wouldn’t you? Anyways, what I am saying is there are hundreds of thousands of creators in this indie/small press community. Some have similar goals and others just do it as a hobby. That’s cool you do you, but to not share a podcast episode you are listening to on your social media or not posting about a cool comic you picked up or backed that your creator friend made is just silly.

Are you afraid of interaction? See the funny thing about social media (minus the bs side of it) is it can be social when given the opportunity. The name “social” is in the name, heh. I know I’m captain obvious. Well, let me show you an example. Okay, say I backed a campaign for Temple High by Sovereign Comics on Kickstarter and I just backed it that’s it I didn’t share that I did it and that is it. Well, you could’ve given them another backer or because if you did share it out someone within your network of creators or fans would see that and be like, “Oh, this comic creator that I value supported this other comic creator that I have no idea about.” Then they would say, “Well maybe I will click on the link and check it out.” See after you backed and/or shared a campaign, podcast, video, or whatever you have opened up your network to your fellow creators that may not have that person. Honestly, I love supporting others as much as I can when I can. I understand everyone can’t do so, but sharing something literally costs you no money at all just 5 seconds, not even to tap share and it goes on your story, in your timeline or wherever else.

The first time I started posting consistently on social media I started first with tagging tons of different creators on Instagram and added #follow. That’s it and the response back when I did that was insane. It was like I discovered fire to them or something, haha. I get that there are a few bad apples in the bunch that is everywhere in every community. You won’t know that if you sit in seclusion and do nothing about it. We grow together! Support each other and together we will in fact grow.