Hello everybody, yes it’s been about a week or so since I’ve written a blog, but here I am! Today we are going to go over the top indie comic Kickstarter campaigns. Alright, let’s jump into it!

Most Backed Kickstarters (US)

First up we have Code Monkey Save World which can be found at the link below.
https://www.kickstarter.com/projects/gregpak/code-monkey-save-world?ref=discovery_category_most_backed
Code Monkey Save World is a graphic novel based on the songs of Jonathan Coulton, written by Greg Pak and drawn by Takeshi Miyazawa. The funding goal was $39,00 and they raised $340,270. This made them be a Project We Love by Kickstarter and it over exceeded their goal obviously. “Code Monkey Save World” follows Code Monkey, the put-upon coding monkey from the eponymous Coulton song, as he teams up with the seething, lovelorn super-villain from Coulton’s song “Skullcrusher Mountain.” The unlikely duo fight robots, office worker zombies, and maybe even each other as they struggle to impress the amazing women for whom they fruitlessly long.
There you go, if you want a successful Kickstarter just include zombies, monkeys, and robots.  No wonder this was one of the most backed Kickstarters.
The seconded will first technically, Most Backed Kickstarter is The Order of the Stick Reprint Drive by Rich Burlew.
There is a comedy factor that appears right at the beginning of their Kickstarter on their campaign picture. It’s about the tale of the eponymous band of heroes living in a fantasy roleplaying game world as they struggle to overcome their enemies, their environment, the rules of the game, and their own crippling incompetence (not necessarily in that order of importance). I don’t know them personally, but I’m sure the creator(s) have a great sense of humor which definitely helps grab the attention of people. Don’t forget to use your personality in your campaign so it’s not just a crowdfunding page people go to and read then give you money. It has to stand out and they definitely made that happen. Their funding goal was $57,750 and they raised $1,254,120. They are first on the list of Most Backed and you can see why, like damn!

Next up we are going to tell you the 2 Most Funded Kickstarters. First up is Ctrl+Alt+Del 1.0: The Box Set
https://www.kickstarter.com/projects/1983987666/ctrl-alt-del-10-the-box-set?ref=discovery_category_most_funded
The Ctrl+Alt+Del 1.0 Box Set houses the entire first ten years of the comic. Everything from the first strip in 2002 to the end of the original Ethan and Lucas story arc in 2012. 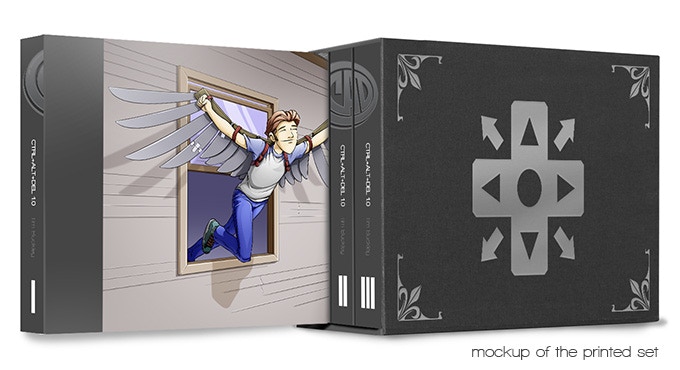 Next up on the Most Funded category is The Tomorrow Girl: Dresden Codak Volume 1 by Aaron Diaz.
Dresden Codak is a lavishly illustrated creator-owned online comic series about science, mystery, and ghosts that began in 2005. The funding goal was $30,000 and $534,994 was raised! Finally, not only is some of the stretch goals awesome like stickers, more comics, and even different editions of the book like a gold edition the overall art is very intriguing which I can see why it was one of the most funding Kickstarters.
Now if you’re wondering about a few Kickstarters to check out sorted by End Date I’ll share a couple with you now.

Starside-Issues 1&2
Starside is a sci-fi/fantasy series about a teenager thrown into an intergalactic war which leads him to discover humanity’s greater purpose. It is August 10, 2019, and the end date is only in 11 hours from now (It’s 9:43 pm EST). Even though they have reached beyond their goal a little extra never hurts. If you see this, back it!
Moby Dick: Back from the Deep#2
Moby Dick: Back from the Deep is about after witnessing Moby Dick’s first appearance — and the carnage that came with it — the citizens of White Sands Beach struggle with how to deal with the zombie whale. Katherine Barlow, the Mayor’s daughter, saw her friend die, and now she wants to know where the beast came from and who the mysterious Ishmael is…
The art is definitely interesting and has a unique style. This one is ending in ONLY 3 HOURS! Back this if you’re interested! Their goal was $300 and raised $472 so far.
Tales from the Cryptic Closet
A comic horror anthology using some of the best talents in indie comics also featuring wrestling superstar, Killer Kross. This Kickstarter ends in 15 hours! Their goal is $3,000 and they have raised $3,320 so far. If you’re a fan of horror go support them by sharing and/or backing this project, but hurry because time is almost up!
Based on a True Story: A Dust Bunny Mafia Comic Quickstarter by Brett Juliano
This mini collection features 22 Dust Bunny Mafia comics inspired by real-life American mobsters ranging from Al Capone to Jimmy Hoffa. I personally love mafia movies and not the crime aspects of these real-life mobsters, but just their impact on American history. There are 58 hours left! Their funding goal is $800 and they so far have raised $1038.
The Game #1 Break Kickstarter by Charles Stickney
In the game of life, no one’s been keeping score… until now. A brand new series from the creators of White Ash. Welcome to THE GAME.
Their funding goal is $9,500 and their at $13,412. This looks pretty freaking awesome. They only have 3 days left! Go find their Kickstarter and share it also if possible don’t forget to back it!